May 7, 2021 By Leo van Zyl Wildlife At Makweti Comments Off

Mothers, we all have one, whether we like it or not. They come in all shapes and sizes, colours, and temperaments. Although some may seem to think that the ‘grass is greener’ on other peoples’ mothers, there is one thing no one can deny, we cannot be without them.

The role of a mother is varied. Whether great or small, their role is a necessity. In nature, for some the term ‘mother’ merely suggests the female parent, whereas for others it reflects caring and nurturing beyond the womb.

Regardless of the size of their influence in our lives, every mother gives nothing but her best for her offspring to have the greatest opportunities in life. For even if we never meet our mothers, we quietly know we are here because of her.

In celebration of all Mothers this May, we take a look at some of the mothers whose influence seeps daily through us.

Probably one of the most well known and respected mothers on the Reserve is the Lion. The only social large cat in the world, the strength of the pride is dependent on the females. We have enjoyed watching the two sisters of the western pride mature and develop into mothers since their introduction to the Welgevonden Game Reserve in November 2016. I remember them arriving as two and half year-old lionesses still adolescent in behaviour. From watching them develop themselves to adulthood, observing their somewhat delinquent behaviour in catching and playing with young wildebeest, to becoming mothers. It was interesting to note the change in behaviour after they had both given birth to their first litters. It was as if they suddenly realised this was serious. The larger of the sisters gave birth first to two healthy boys with her sister giving birth to a pigeon pair a couple of months later. Learning their patterns and understanding their behaviour during this intimate transition into a mother was fascinating and a privilege.

Both have since had a second litter, the one female giving birth to her third litter about 3 months ago. We can see them adapting and learning to their new little family members, using the experience gained from previous litters to make life a little easier for them and their cubs. Old, but good habits certainly die hard. The bonds formed during growing up is important for the lion society. The females will affectionately associate with each other within the pride and companionship amongst them may last a lifetime. Particularly in related individuals, such as sisters and between mothers and daughters, this social bonding forms the foundation of the pride. 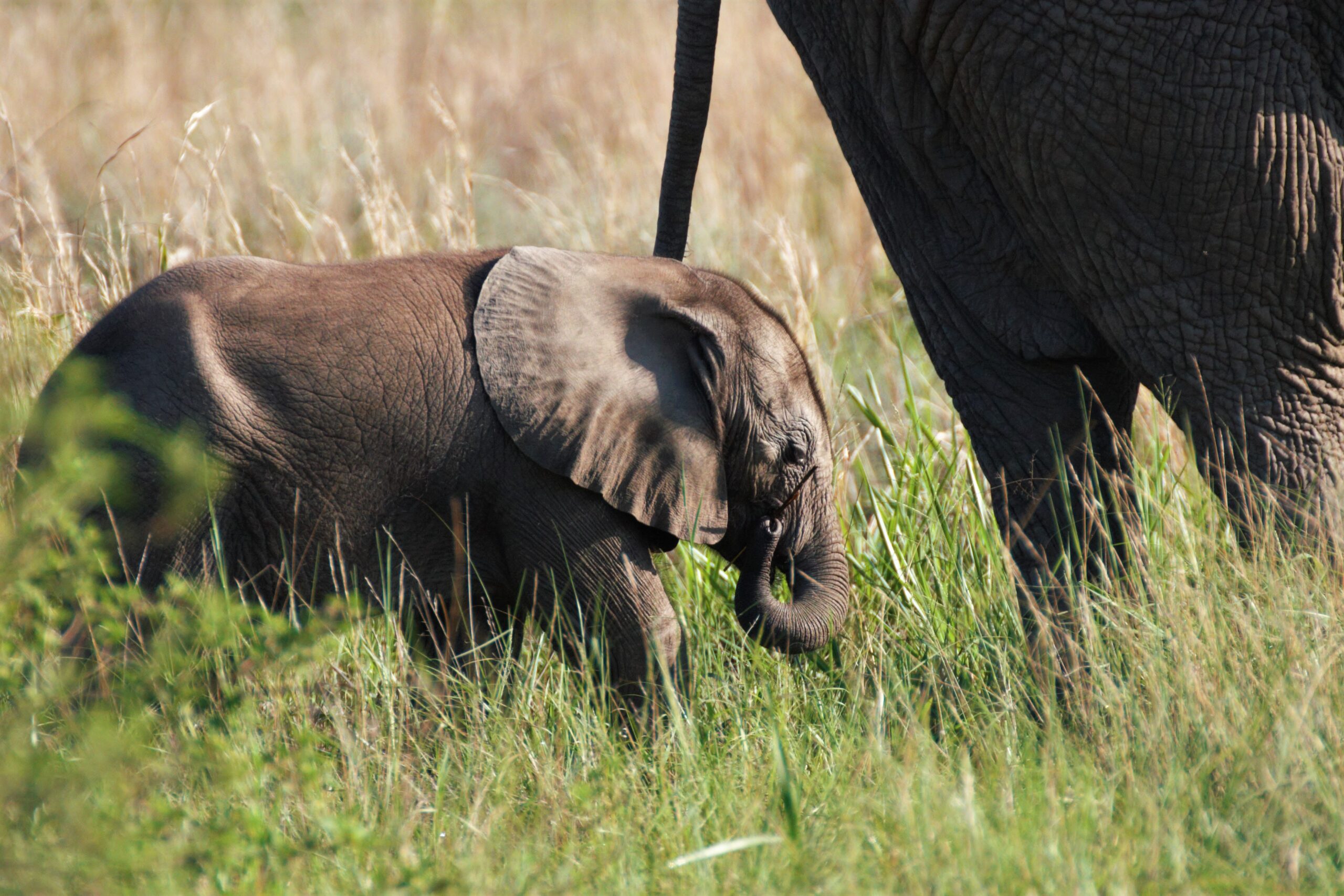 Elephant calf’s, mini replicas of their moms, their journey to adulthood is overseen by a devoted mother and other adult female relatives. Perhaps growing up in a social society lends itself to greater success for a mother. Elephant females reproduce slowly, as a result of the intense prolonged care their calf’s demand. An adult cow will breed from eleven years old, giving birth to a calf every four to nine years, depending on nutrition availability and population density. Carrying her little one for twenty-three months before giving birth, is just the beginning of her role as a mother. The mothers are caring and attentive, not only to their offspring but to the herd family members. The Matriarch is the pillar of the family and leads for many years until either too old or feeble. With so much care required in raising a little elephant, one would need to have one of the best mothers available. An elephant mothers’ bond with her little one can endure for 50 years. 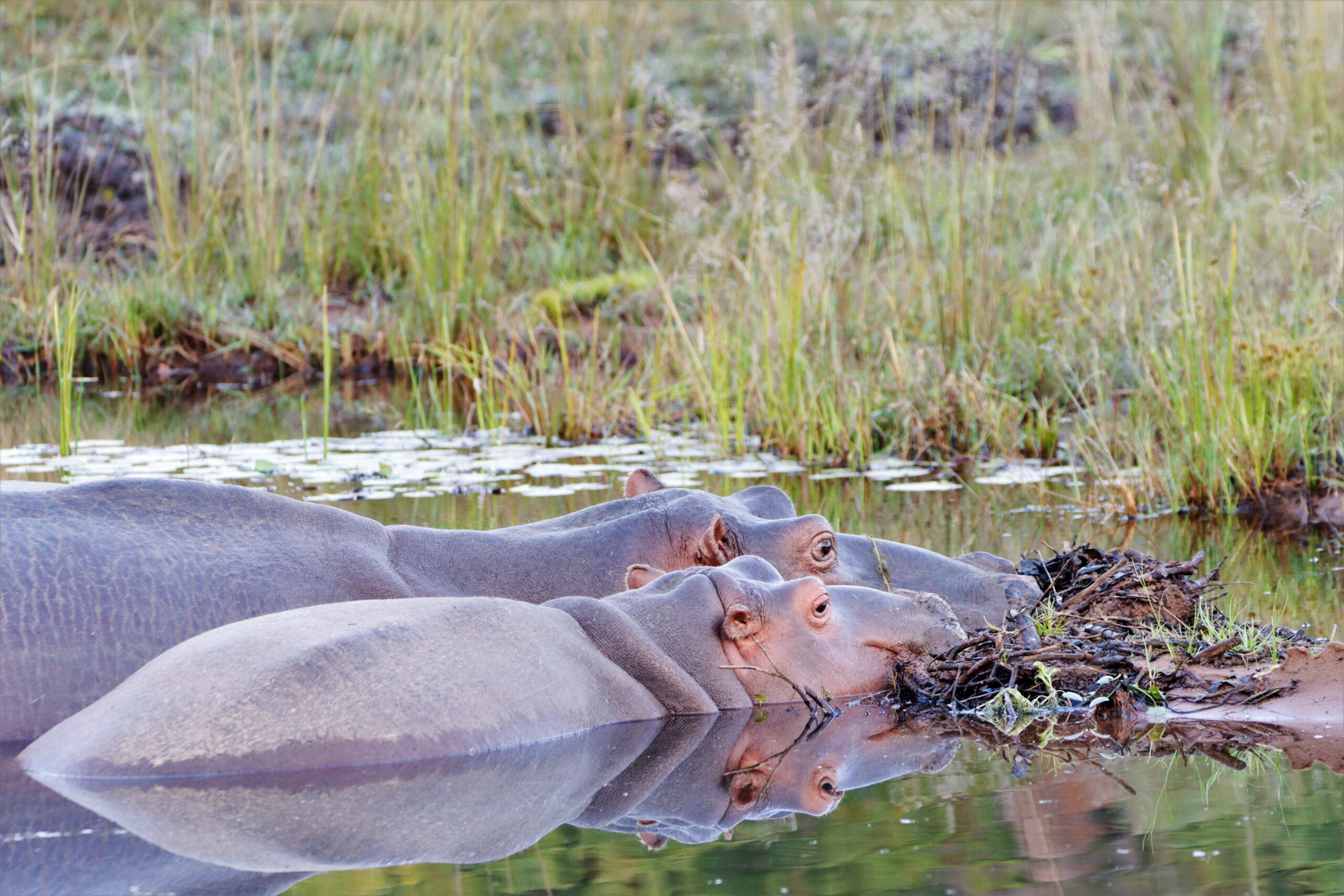 The hippo. Bulky, piglike and tinged with pink. A baby hippo and its mother seen here lying close together in the shallows of Rhino dam, trying not to move too much as to disturb the thin layer of now warm water that surrounds them on a chilly winter morning. This hippo calf was born in April 2019.

A hippo mother carries her calf for eight months, before giving birth in the shallows of the dam. A mother will calf every two years. Hippo mothers are attentive but having slow metabolisms in comparison to other large herbivores, both mom and calf’s energy needs are lower, making resting, rather than eating, the primary activity. Hippo calves suckle in the water submerging for a few gulps of energy rich milk, before surfacing for a breath of air.

In May 2018, a calf was born to the same group of hippos in Rhino dam, but sadly in December 2020, this calf was struck by lightning and died as a result. Even for a mother hippo, losing a calf is tragic.

For most mammals, other than the cats, a single offspring is born, making motherhood a little more focused and allowing them to put all their energy in the success of their offspring surviving the first tough couple of years. For birds however, sometimes mothers require a little help. 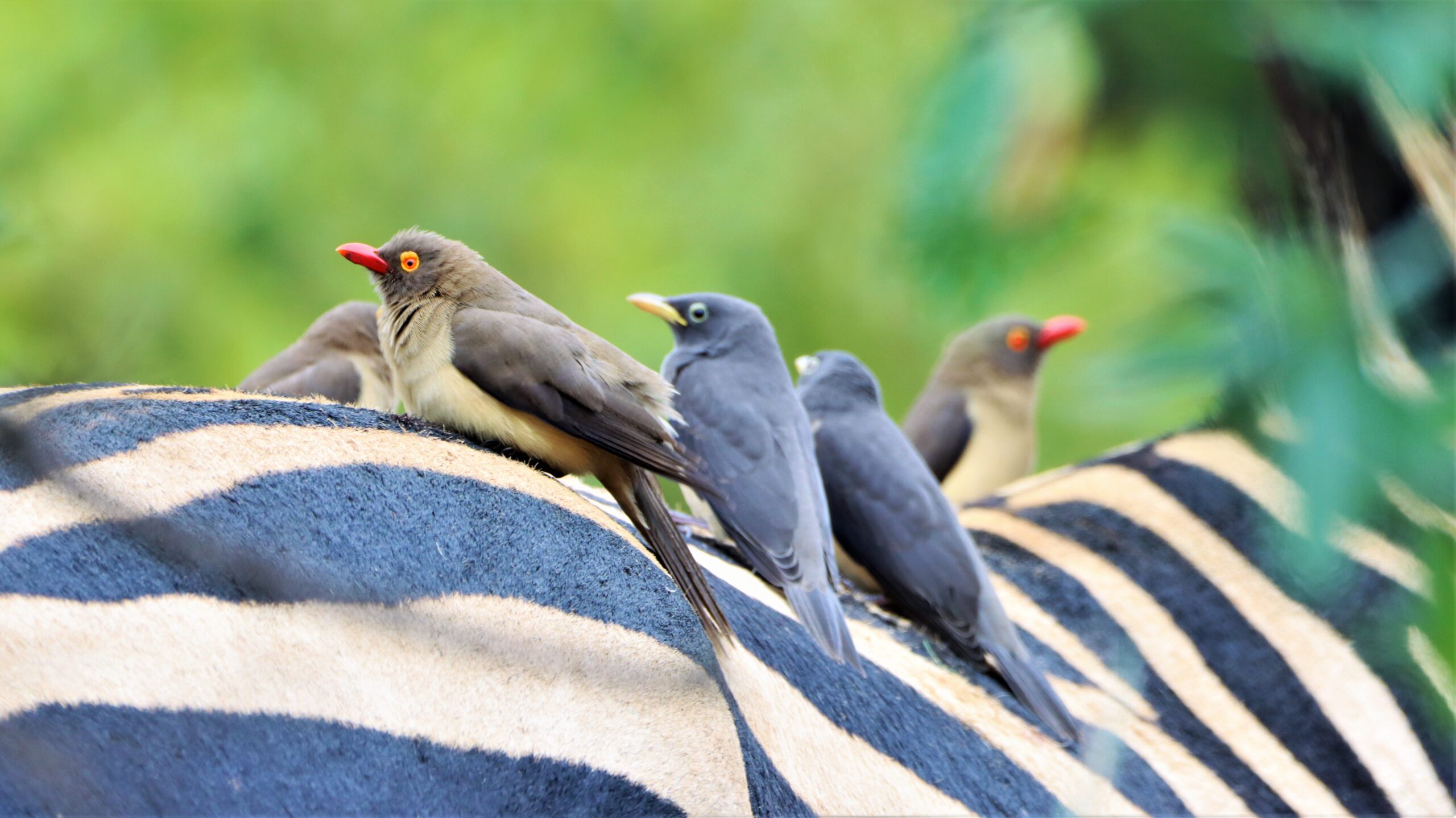 We have featured Oxpeckers before, but these mothers have their claws full in raising their chicks. So much so, that once the chicks are old enough to venture out of the nest, they call upon others to help raise the brood. Finding food for so many little beaks is tough, not forgetting to find your own food. While young Oxpeckers learn to forage for themselves, they spend the time with mom, and dad, in getting to know their food substrates. Buffalo, giraffe, zebra, kudu, and impala, all provide a good platter from which the buffet is served.

Cooperative breeding in birds is not common, but is adopted by some species, where in the case of the Red-billed Oxpeckers, as many as seven helpers will aid mom to raise her brood. When you have access to nannies, why not! 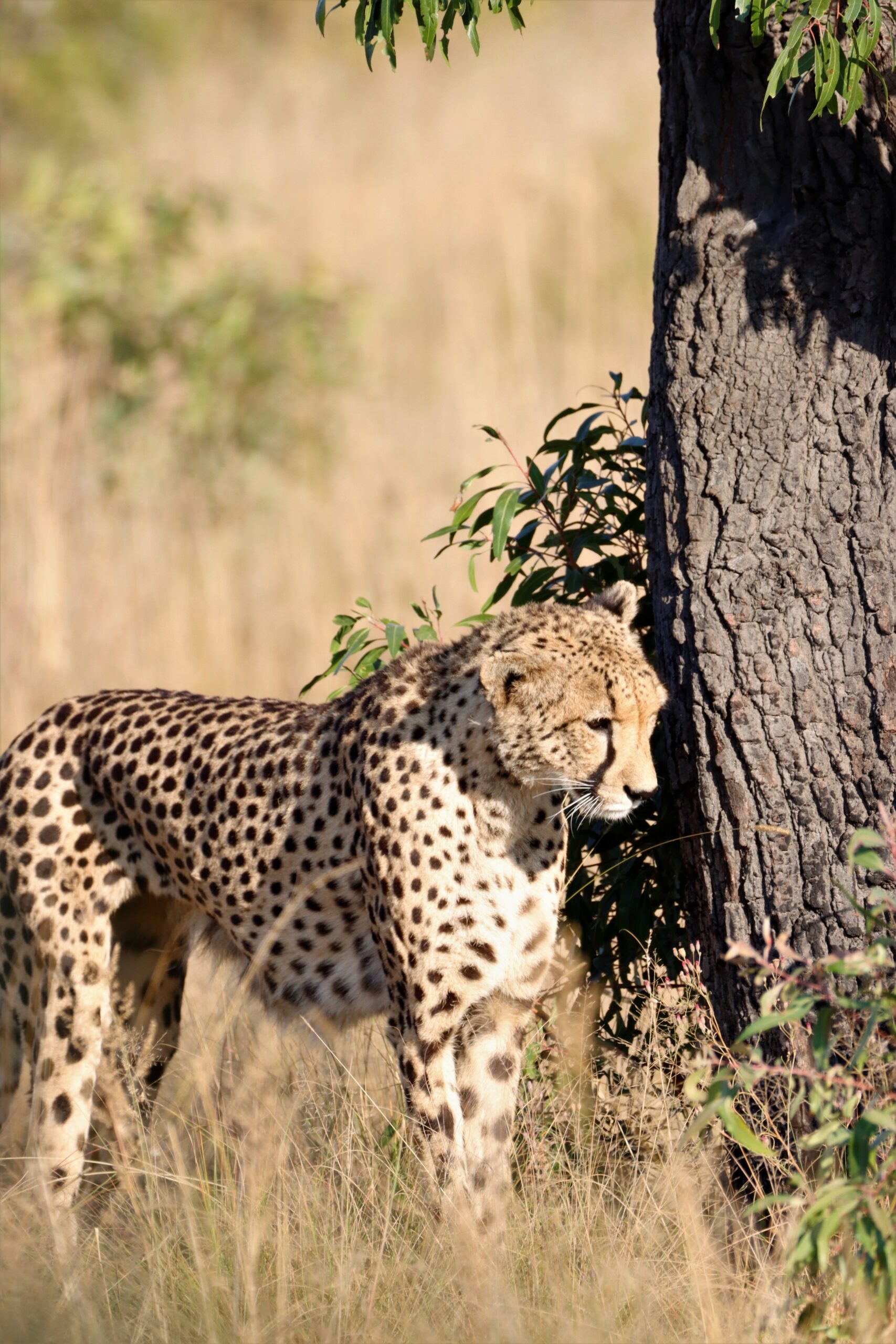 One Saturday morning, we went out on drive, the chill of early winter penetrating the air, doing it’s best to dampen the excitement of heading out yet again. It failed miserably. We were well rewarded with a special mother moment. We watched this cheetah female for a little while, walking through the long grass close to us, but far enough for us to not see that she was being followed. She stopped at a beech tree, as if instinctively and waited a while before she got up and peered intently at the base of the tree. She turned, giving whatever, it was that caught her attention a brief acknowledgement. A little head popped up right where she had been, her single cub. 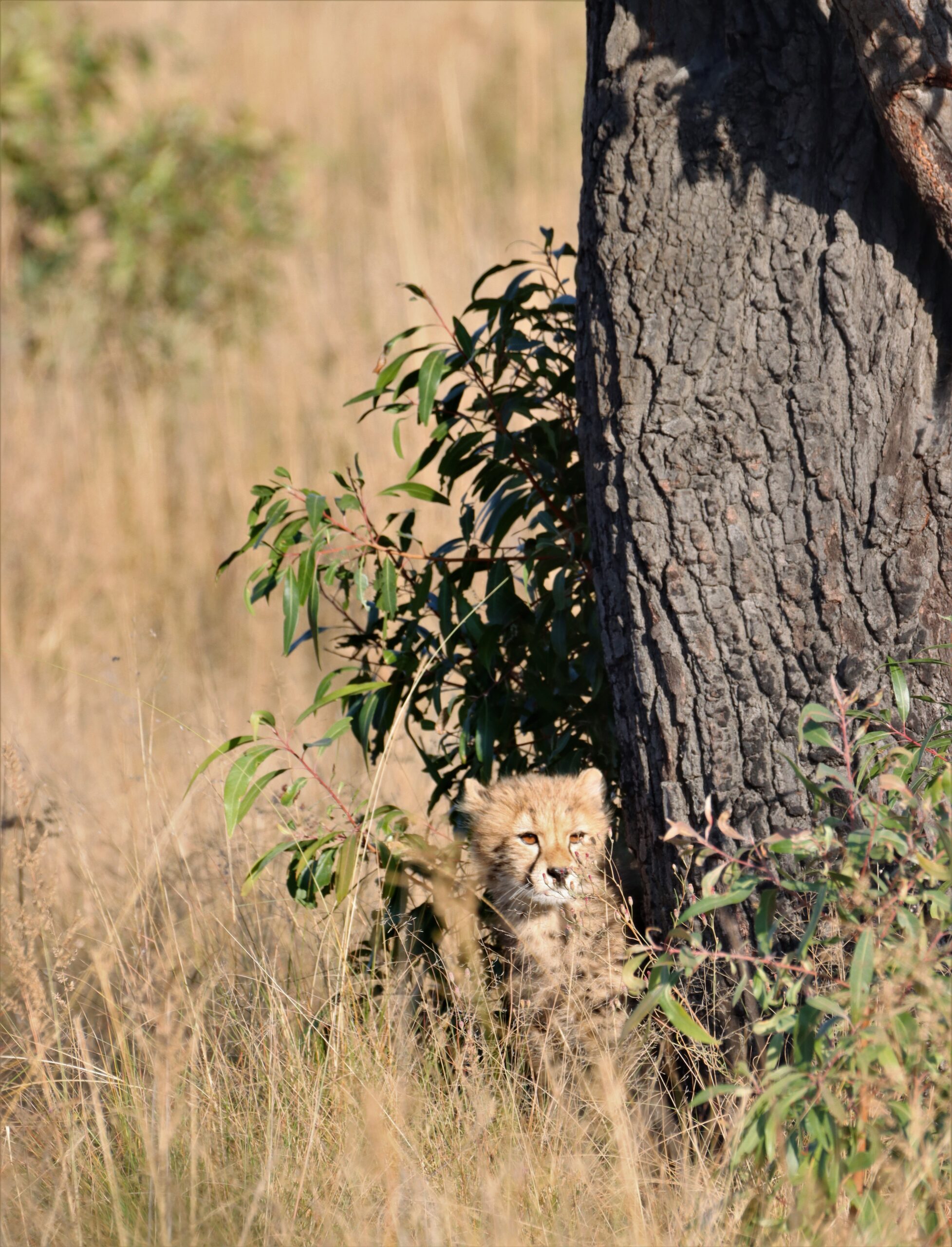 I first saw her at the end of March, a month ago, further north, her single cub with her. She gave birth to two cubs; however, she was later seen with only the one. When we spotted her in March, she was calling fervently for her second cub but never found it. They had been separated from each other forever.

Now, we watched the little one catch-up with its mother before they crossed the road.

All the mother cheetahs on the Reserve deserve special mention as they have all contributed so much to the overall cheetah population in Africa but even more so to all of us who have been fortunate enough to have spent snippets of their lives raising their cubs. They are such a unique feature of the experience on the Reserve.

In the almost five years we have been at Makweti Safari Lodge, we have seen so many of the cubs grow up and mature into adults, one female become a mother of her own, and many others relocated to other parts of South Africa and around Africa, a vital conservation effort, driven by the Endangered Wildlife Trust and supported by Welgevonden Game Reserve. I implore you to read some of our other stories to share in the special bond these cats have with their cubs.

If we had to chose one stand out mother, it would be the mother cheetah who made the ultimate sacrifice for her cubs for them to survive. Her life. She was a dedicated mother right to her end. Read about her and the orphans that grew against the odds into mature healthy adults in our blog ‘You taught me almost everything’. 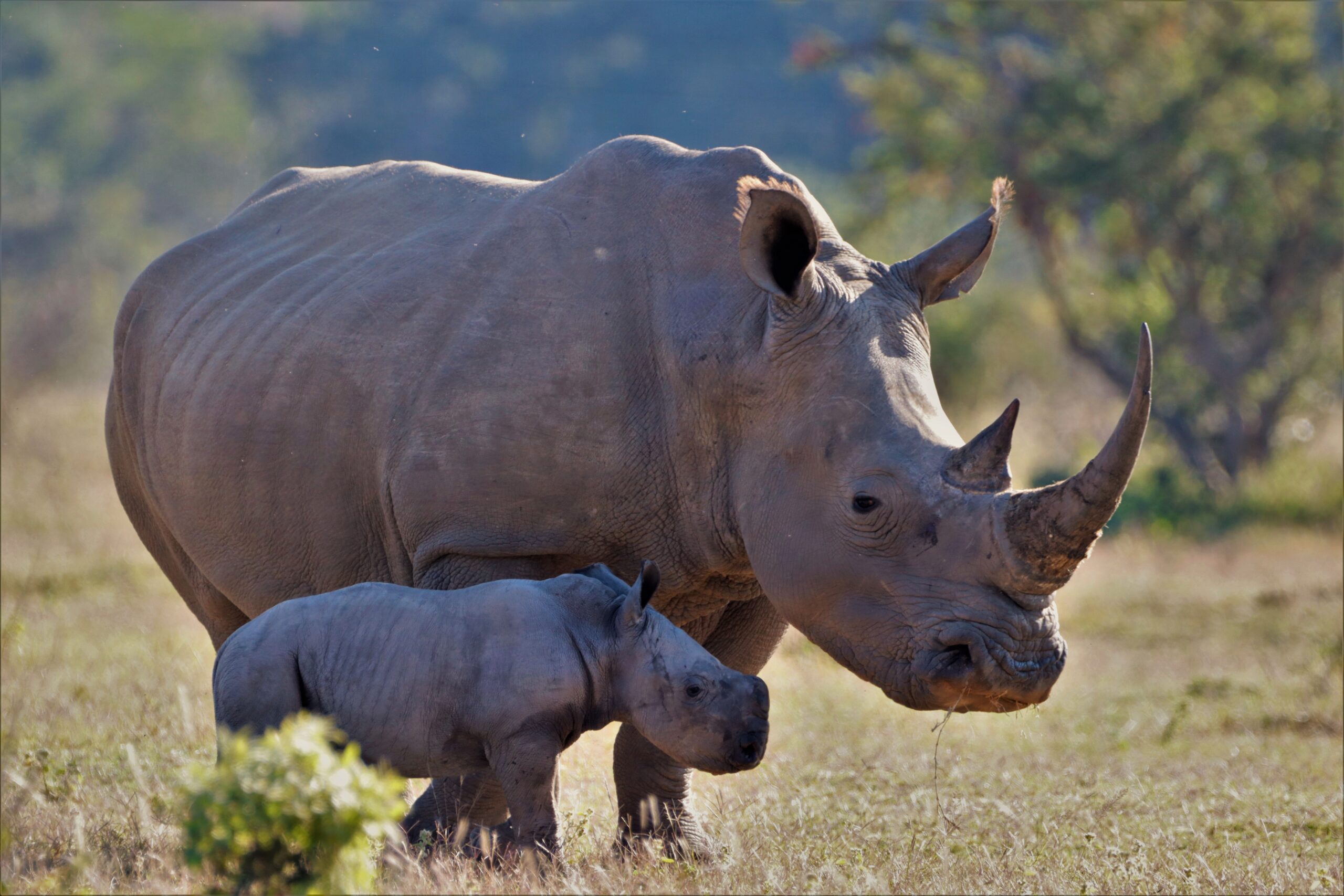 Monday morning, 26 April. Heading back to Camp after a successful morning out in the southern parts of the Reserve, we came across a rhino cow at Fig Tree plains. She had what at first appeared to be a warthog with her, as there were a number of warthogs feeding in the same area. Closer inspection revealed a little rhino calf, newly born standing right behind his mother. He was estimated to be at most a week old. We watched them for a while, the little rhino animated by the warthogs and why not, he had only been around for seven days. So much to be learnt of his new environment. We informed the Reserve Management of our find, who confirmed later that afternoon that this little rhino was a new addition to our population, one they had not recorded yet. As a means of record and monitoring, new-born animals of key species on most reserves are given an identity. This makes for easy reference for the wildlife management teams on the ground. As a result of our new find, this little boy will be officially referred to as ‘Makweti’. 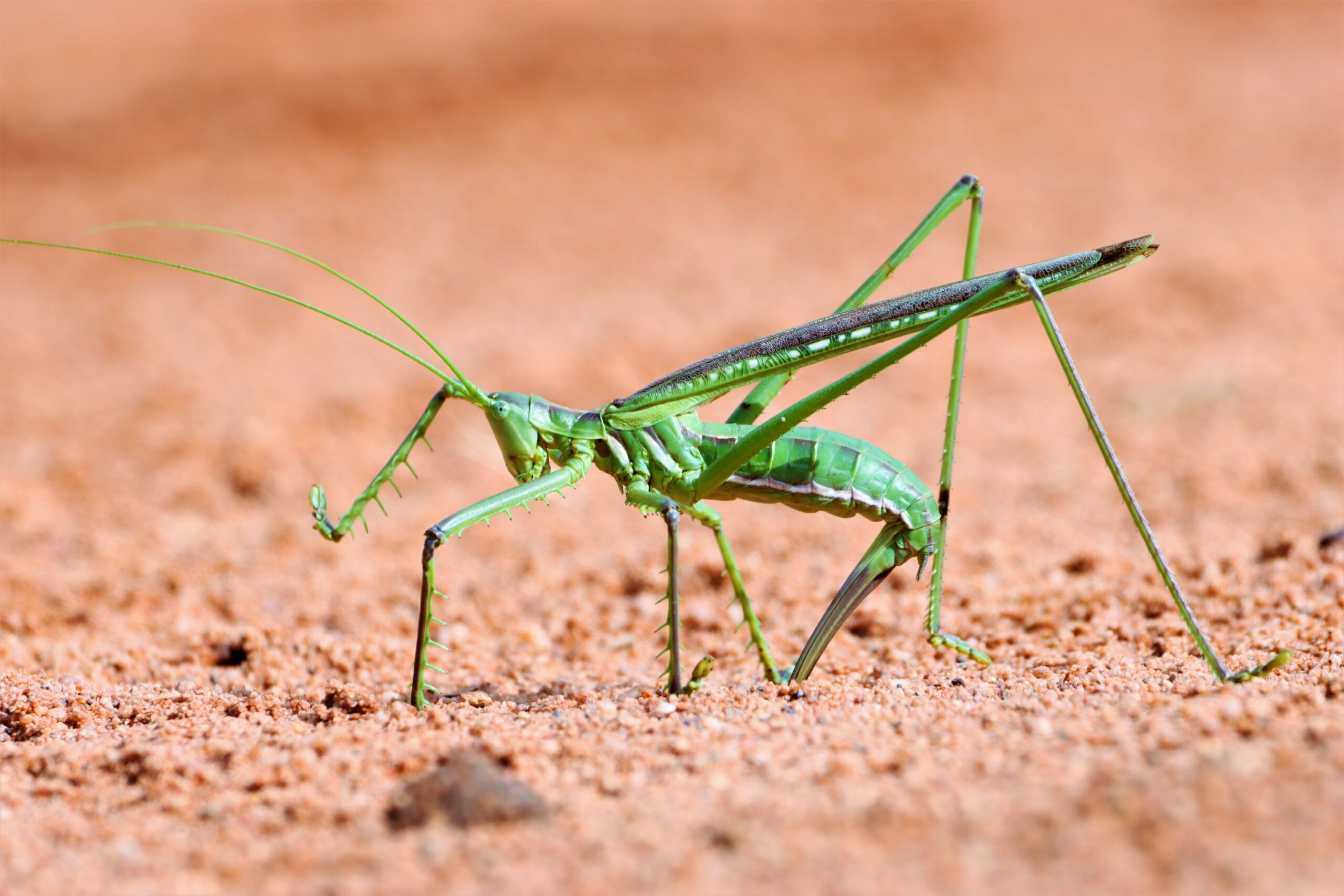 Without all the mothers on the reserve, we would have no stories to tell, no experiences to share and enjoy. From the winged predatory Katydid, choosing the best place to lay her eggs in a sandy patch, never meeting her hatchlings but giving them the best chance to survive and grow to be mothers, and fathers, themselves, to the largest, most admired and revered maternal heroes who walk with us.

To all our mothers, the hefty and lumpy, sleek and speedy, spotted, grey, wrinkled and hairy.

We love you All.

1. 30 years of personal observations by the author on various Reserves in South Africa including Welgevonden Game Reserve

2. All the Mothers we have been privileged to meet