Neil Finds An Elephant Tooth – A Rare And Fortunate Find

October 29, 2018 By admin Wildlife At Makweti Comments Off

For the past 18 years of my life in and out of the bush, I have been fervently searching for a jewel, and at last I have found one. It was late Friday afternoon when we were heading into a valley, south of the Taaibos River. Our attention was fixed on a cheetah female that we had not seen for some time and had been sighted about 10 minutes away from where we were. This is the female cheetah we featured in April this year on our blog. Her cubs left her on the evening of the 27th of June and became independent, and we have not seen her since then, although her cubs have been sighted regularly. I was keen to see how she was and if she was showing any signs of new cubs being born. But, I digress.

As we descended towards the Taaibos River, this unmistakably shaped object immediately caught my attention. Lying just off the road verge in a little depression was the fragment of an elephant molar. What initially caught my attention was the clear ‘triangles’ of dentine that are the top of the tooth. I stopped and collected it for a closer inspection. 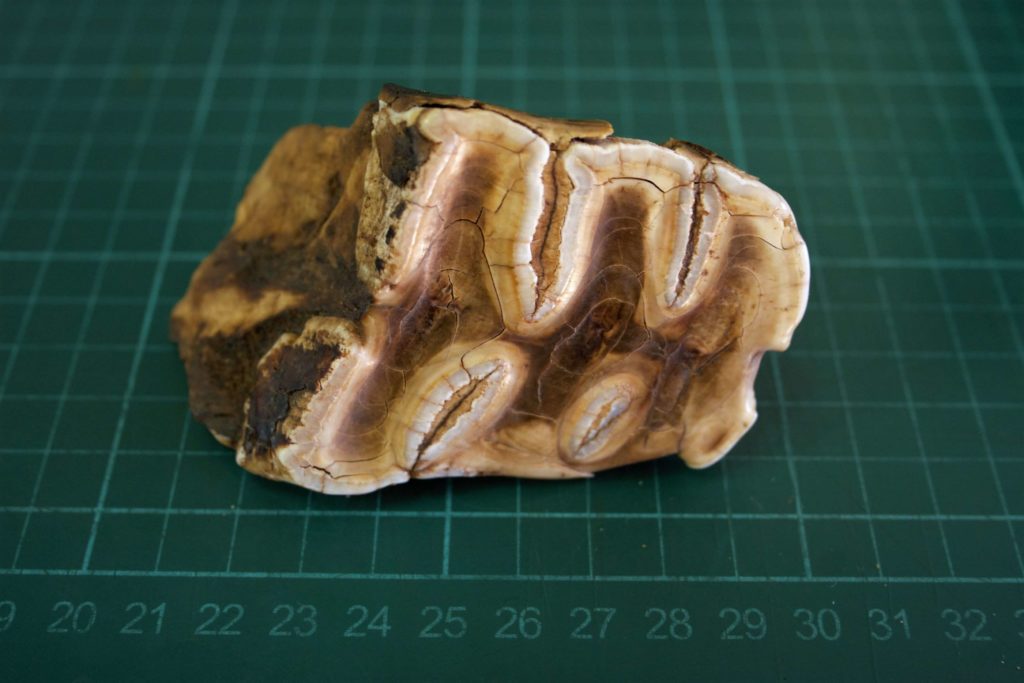 I was surprised at the weight and density of the tooth. It was approximately 50% of a tooth that had been ‘lost’ or pushed out as the new set emerged in the jaw. We assume it was the from the right side of the jaw, given the angle of the tooth and the shape of the root. It is often thought that an elephant molar or premolar is made up of several teeth fused together, however if you look at the tooth in its entirety, it has two roots as per any other typical mammal molar, indicating that it is a single tooth.

Examining the pictures I took of the tooth, the brown stains and marks are from tannins and other chemicals prevalent in their diet. These brown dentine plates are surrounded by enamel.

Elephants have two types of teeth:

The ‘new’ emerging molars move in from the back of the jaw replacing the older worn teeth that fragment and are then lost. The replacement teeth are larger than the tooth being replaced by up to 25%. They move into the jaw like a conveyor belt, which is unlike other mammals replacing their teeth from below in the jaw. The track in the jaw on which they move is longer than an individual tooth so at any time there could be eight molars in their mouth.

As elephants age and their teeth stop developing, they will ingest less food than is required to sustain their body weight and condition. This lack of nourishment puts the animal under stress and they become susceptible to diseases because their immune systems are affected by the lack of sustenance. They often suffer from heart conditions as the heart muscles also become stressed by the lack of nutrition.

The Savanna Elephant taxonomic name (Genus – Loxodonta) is born from the tooth structure. Loxo – from the Greek word Loxos, meaning angle and donta, meaning tooth. This refers to the unique ridges and shapes on the upper surface of the teeth as seen in the images of this fragment I photographed. How’s that for an interesting fact?