April 22, 2018 By admin Wildlife At Makweti Comments Off

Over the years, guests of Makweti Safari Lodge have had the pleasure of watching one of Welgevonden’s female cheetahs come into motherhood.

It has been a while coming since she started exhibiting the necessary traits needed to become a successful, nurturing mother on the reserve. She has since raised three beautiful litters over the space of five years, and it has been an absolute honour to be a part of her journey.

This beautiful mother first had a litter consisting of a male and female. In January 2017, when the cubs were 15 months old, they left their mother and moved onto the reserve on their own. She subsequently went into hiding and for three months was nowhere to be seen. However, there was evidence of her whereabouts in areas close to Makweti, mostly within the Fig Tree Plains. In March 2017, we stumbled across a fresh impala kill of hers, with fresh tracks leading away into the hills east of the plains and south of the lodge.

The male and female offspring were now of an age where they could fend for themselves, so we were in preparations with the Reserve Management to have them taken off Welgevonden, and introduced into another reserve. We do this to improve the genetic variability of that sub-population and to reduce the effects of inbreeding in our local population. But still… their mother was nowhere to be seen.

Early in April 2017, the mother was spotted at Ibubhesi Plains, some 1.5kms from Makweti Safari Lodge. This was wonderful news, especially since she was now with three new cubs, who were around 8-12 weeks old at the time. She was naturally shy and spent very little time in areas where we could view her safely and unobtrusively, but as the cubs grew older, she became more relaxed around the vehicles, as did her cubs.

Although we couldn’t be sure, we suspected that her den was about 500m from the lodge in a shallow valley south of Makweti. She spent a lot of time in this area and could be seen from time to time on the valley road between Makweti and Fig Tree Plains.

In July 2017, we were fortunate enough to witness this beautiful mother catching an impala ewe, just 100m from the lodge waterhole. We estimated the cubs to be around 3-4 months old, as shown in the image below. 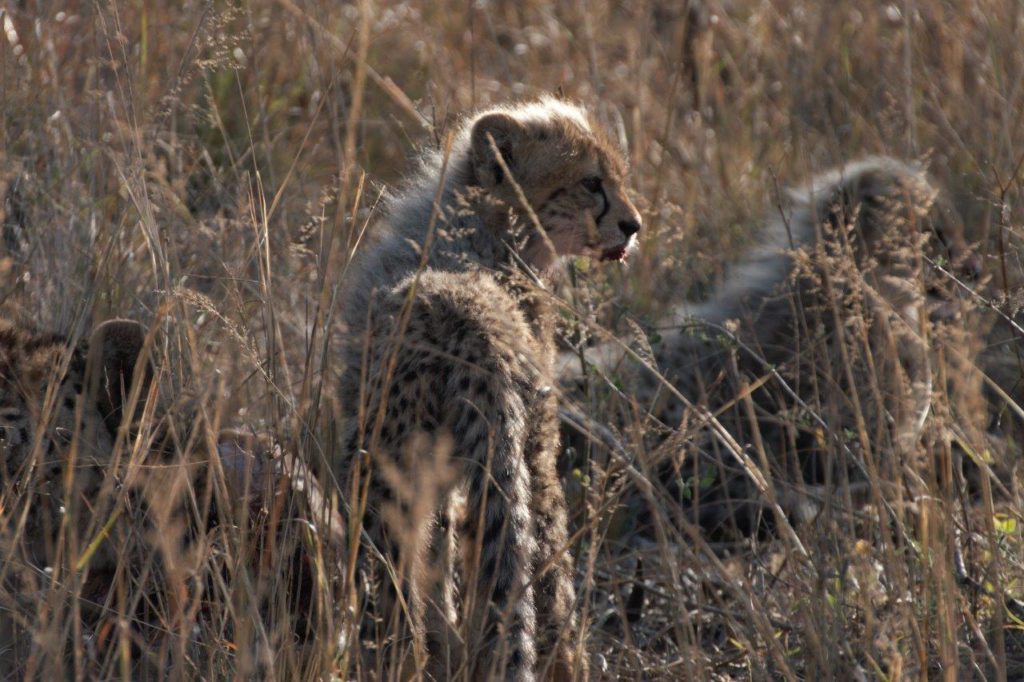 You can clearly see the characteristic white mantle on the back of the cub’s neck. They usually start to lose this at around 4 months old, although a slight mantle is still visible on older cubs of more than a year, appearing more like a slightly raised hackle on the back of their necks. From 4 months old and onwards, mom and her cubs were frequently seen around the lodge and in Fig Tree plains. These were incredible moments for our guests and an absolute privilege to witness so close to Makweti!

Hunting became a full-time occupation for mom as she needed to double her meat intake during periods of lactation. A tall task for a mother of three, but she managed to pull it off beautifully and with incredible grace. As the cubs grew older, the family of four moved out of their more familiar areas and started venturing into the middle of reserve. They spent much time around the western airstrip hunting in the plains for smaller and medium-sized antelope. The cubs patiently watched and learned as their mother brought in the necessary nourishment for them all.

New Challenges For Our Cheetah Mom

At almost 6 months old, mom and her cubs were regularly seen near the airstrip. Some really clear sightings helped us ascertain that she had two sons and a daughter. 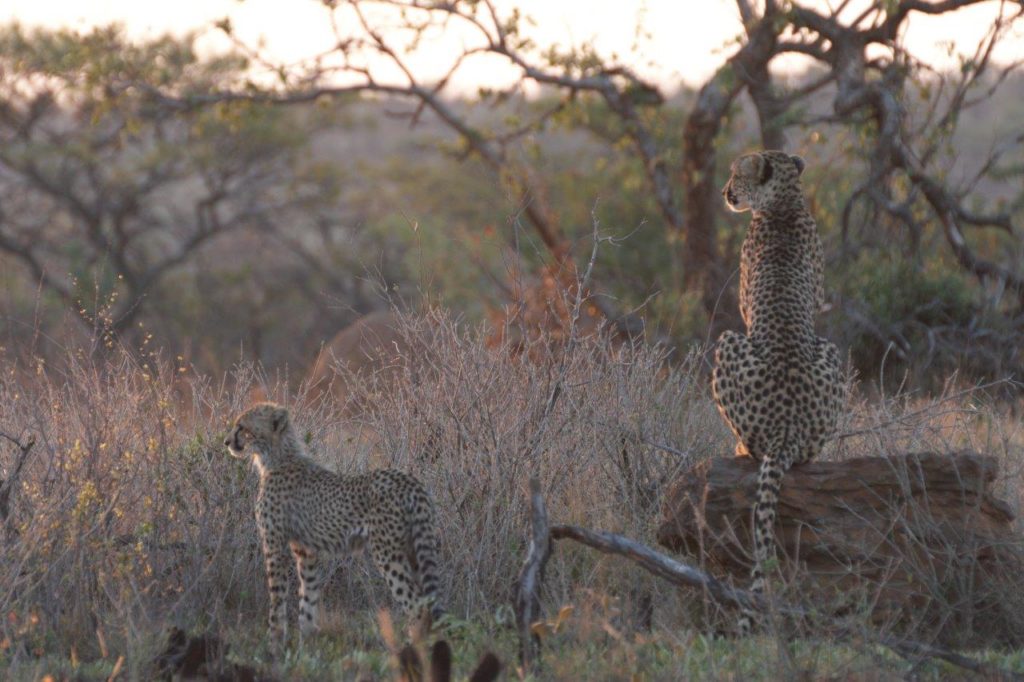 Around this same time, the western pride of lions had new cubs of their own. Their movements coincided with those of the female cheetah and her cubs, and this brought on a new challenge for her, so she spent much time moving in the southern and western areas of the reserve, avoiding the western pride and protecting her cubs. She was often seen hunting the hills and plains south-west of the Sterkstroom pan during this time.

Recently, we have seen her moving around all areas of the reserve, showing her cubs the ropes and letting them partake in hunts of their own. Her movements have become less predictable and she will pop up unexpectedly in areas that she used to frequent with her previous litters. The cubs are now almost 11 months of age and will most likely move away from their mother within the next 4-6 months. 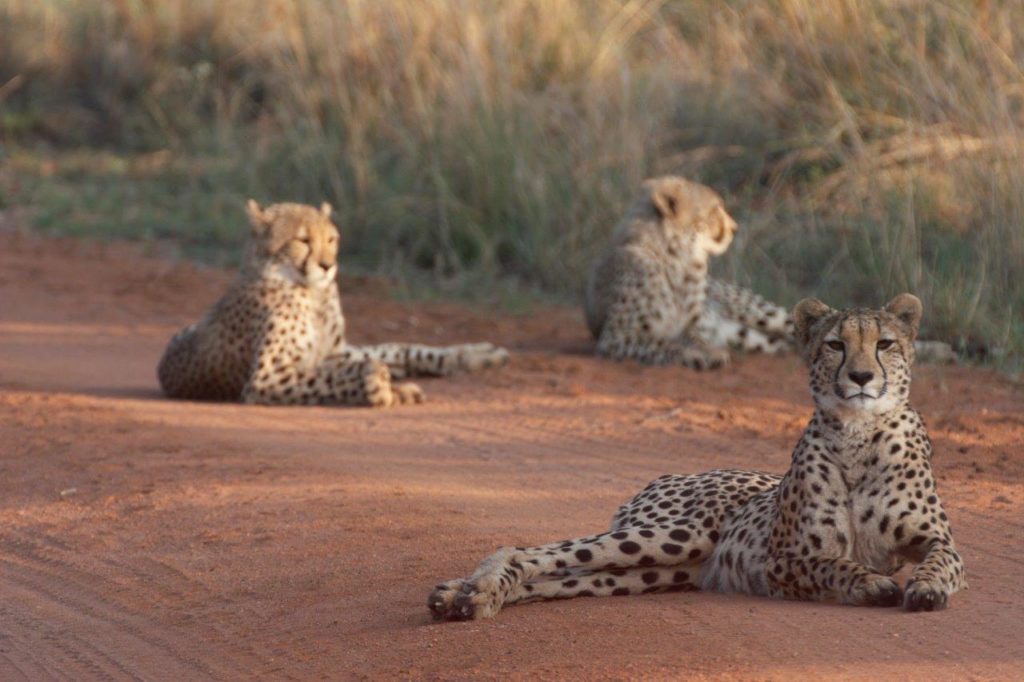 In preparation for their separation from their mother, the cubs will begin to partake in more hunts until they are successful enough for mom to let them venture solo. One day, she will get up to move on and her cubs will simply not follow. It sounds like a sad ending to our story, but it’s the natural way… she will leave them to be independent, adult cheetah, and this will be their own new beginning.

It’s tough being a mother cheetah in any natural environment, however the success shown by this female is testament to her commitment to her offspring. We look forward to witnessing her accomplishments in raising future litters and will continue to monitor her cubs into adulthood.