What’s In A Name?

March 3, 2020 By admin Wildlife At Makweti Comments Off

“What’s in a name?  A rose by any other name would smell as sweet.” ~ Romeo and Juliet by William Shakespeare.

A name. It is most often the very first thing we learn about something or someone. It allows us some insight into that person (or in this case an animal) and forms the basis for our judgments to accumulate. Names give us meaning, understanding and allow us to group things together.

I am often asked if we name our animals or if they have names, and the simple answer is ‘no’. As much as each individual animal we encounter has its own unique character traits, naming them would be just another human attempt to better relate to the animals, having little meaning or relevance to them.

I was recently asked by a guest why a vervet monkey is called just that. The answer was not close at hand but was of interest as I had already started researching and writing this blog. In digging around I found some background information on the origin of the name. The South African National Biological Institute, SANBI had the answer. The vervet monkeys are grouped in the genus Chlorocebus, which translates to ‘green monkey’ of which there are 6 species. The ‘green monkey’ reference alludes to the slight olive-green tinge in some groups of this species as there is great variation in the body colour of these monkeys in southern Africa.  There is still some debate about the exact taxonomic classification of the vervet monkey and in southern Africa is widely accepted to belong to the genus Cercopithecus.  This translates to ‘long-tailed monkey’. Either way, the name vervet remains and is widely accepted as the common name. 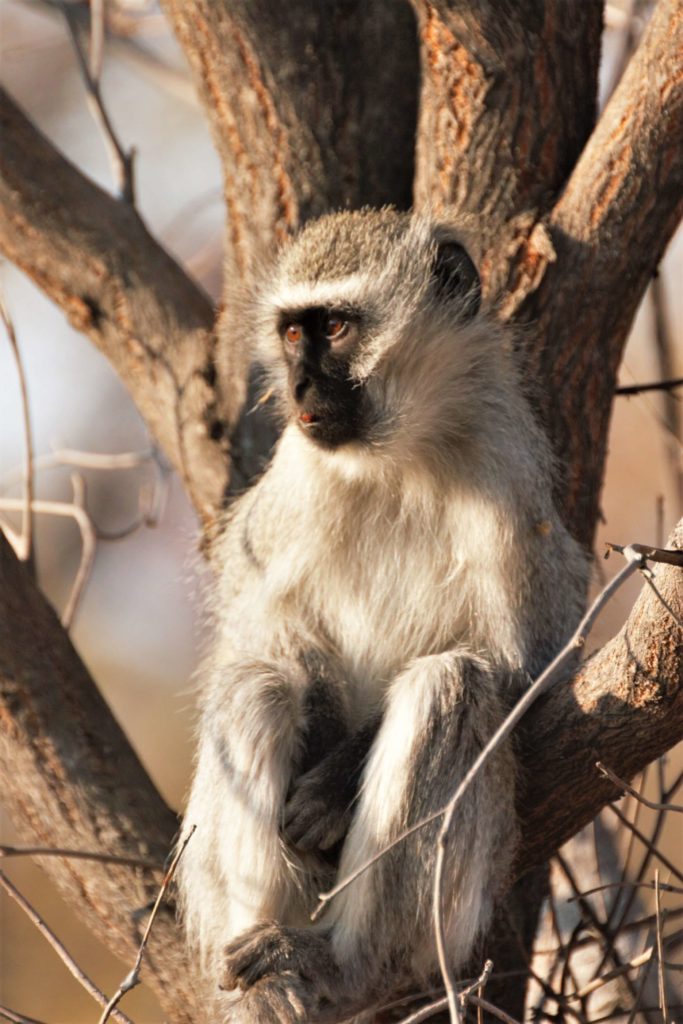 The origins of African animal names are fascinating. They tell of ancient travels and new discoveries from eras gone by and of the great adventures of the first explorers into the great continent. In the early to mid 19th century, numerous explorers began their discoveries and the first safaris were undertaken.

The word ‘safari’ is of Swahili origin and translates to ‘journey or expedition’. This intern originated from the Arabic word ‘safar’ with the same meaning. Until 1890 it was regarded as a foreign word, where it became officially accepted in the English language. The word itself conjures up great images of travels across the vast African plains, teeming with herds of antelope, of tents and campfires, camp hands busying themselves with duties for the masters of the great expedition. Of canvas washbasins and leather saddlebags, meat grilled on an open fire and the smell of tobacco punctuating the cold dark African night.

The greatest safaris in Southern Africa originated from the Cape Province and were endured by two Englishman who were intrigued by the stories told of travellers before. William Burchell, one of the most well-known explorers in the early 1800s was responsible for much of the information we knew about many places, plants, and animals that he would encounter on his expeditions into the area.   At first rule, the British banned any expeditions into the interior from the Cape and penalties were in place for anyone who would attempt to travel north and over what we know now as the Orange River.

William Burchell’s exploration desires grew from his fiancé falling out of love on her journey to marry him on St Helena island. Abandoned and desolate, he travelled to the Cape, resigning from his post as a botanist for the Dutch East Indian Company. He set in motion a discovery of some of the most well-known species we see on Welgevonden Game Reserve today. Whilst hiking on the slopes of Table Mountain, Burchell was astounded at the diversity of plants he handpicked and later described, and this would spark his desire to discover more. He set about gathering all that was required for his first safari and commissioned his first ox-drawn wagon for £88! These wagons would for generations to come, form the backbone of every safari. 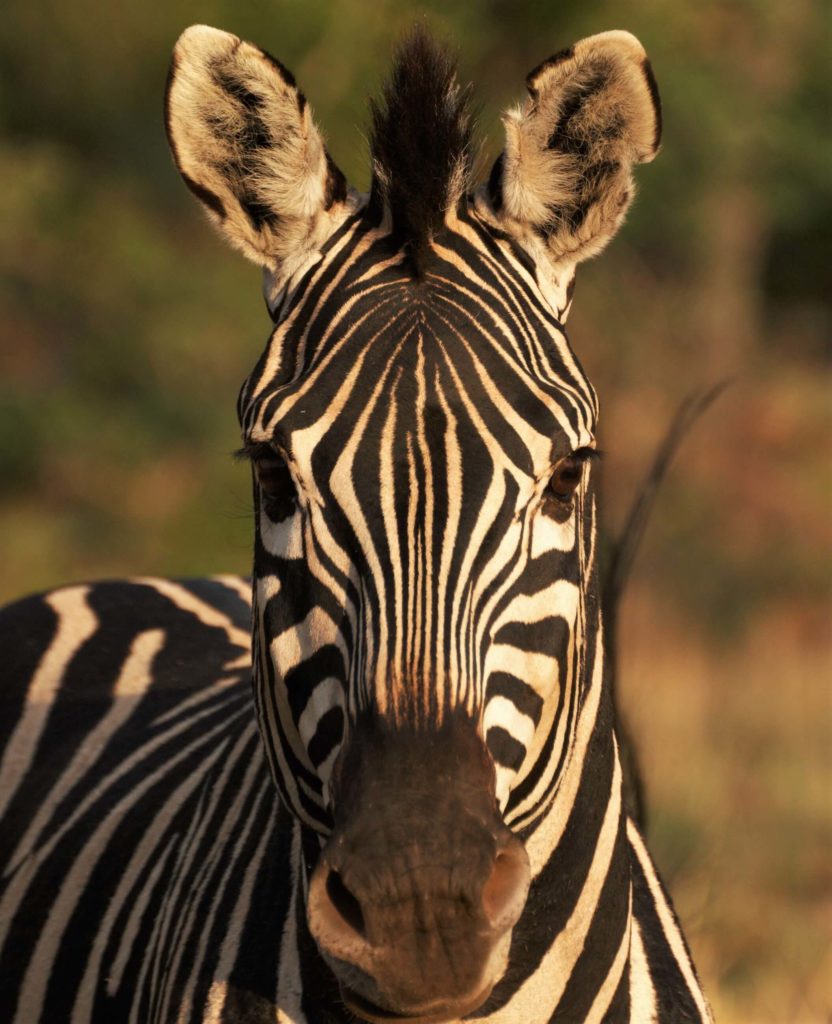 Some of Burchell’s greatest discoveries on his journeys from 1811 – 1816 were the discovery of white and black rhino and of the Burchell’s zebra. The white rhino or square-lipped rhino was earlier referred to as Burchell’s rhino. The origin of its name ‘white’ was and still is believed to be a misinterpretation from the Afrikaans or Dutch term ‘wid’ referring to its wide mouth and not ‘white’. The square mouth of the white rhino is evident of its diet, feeding on copious amounts of grass daily. Burchell’s earliest safari inland was to the town of Kuruman, and it is also believed that the name ‘white’ in describing this rhino species, also referred to the lighter appearance of those animals found in the Kuruman area. The white clay soils in this area responsible for this observation where the rhino frequented mud wallows in order to cool down and rid themselves of ticks and other pests. White and black rhino or square-lipped and hook-lipped rhino are of similar natural colour, and so their names have no bearing on appearance.

Interestingly, Kuruman would be the first mission post in Africa for David Livingstone in 1841. He was born in 1813, the year that Burchell arrived in Kuruman. Burchell would go on to discover many other species on his expeditions and would be responsible for the earliest description of many species. These include the blue wildebeest, African wild dog, tsessebe, African wildcat, kori bustard, and the Burchell’s starling to name a few.

The taxonomic names of many African species are derived from old world languages such as Greek and Latin, and whilst interesting and more scientific in approach to families, genera, and species, it follows a more controlled method of nomenclature. The real interest in animal names comes from the vernacular or colloquial origins or name uses.

Other Origins of African Mammal Names

A large spiral-horned antelope that prefers dense thicket and bush where it spends most of its time feeding and avoiding predators. This majestic antelope is iconic and was cemented as the logo for the South African National Parks Board. The name ‘kudu’ is of Khoikhoi origin, the name given for this species. In isiXhosa, a language spoken largely in the southern and Eastern Cape, the name ‘íqhude’ applies and is of similar origin. The name for this species of antelope is accepted in the English dictionary as ‘kudu’. 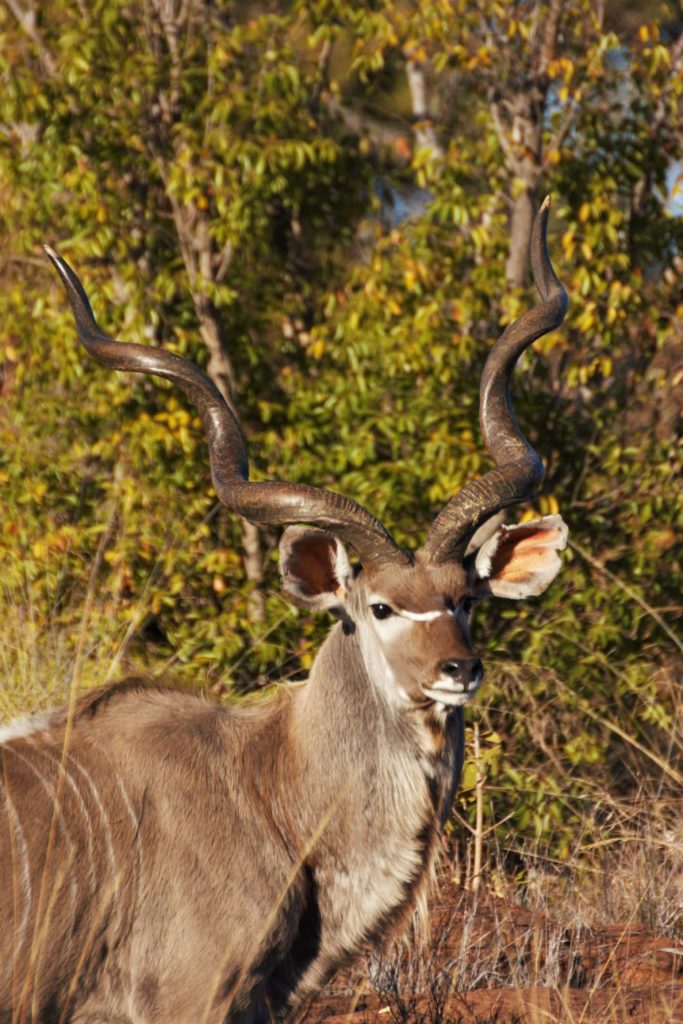 Another of the well-recognised and arguably the most common antelope, certainly in southern Africa, has its name originated in the African language as well. It’s slender curving horns and distinct red-orange colour are what stand out most in its appearance. The word ‘phala’ is of Tswana origin, a dialect of North Sotho spoken widely in the NW parts of South Africa and into Botswana.  This means ‘red antelope’ and eludes to the distinct reddish colour of their coat. The name ‘impala’ was used from the late 19th century and has become the official name accepted in the English dictionary. In Afrikaans, the name ‘rooibok’ is used, which translates to red buck and is colloquially used in South Africa to refer to the impala, by both Afrikaans and English.

The Blue Wildebeest or Brindled Gnu

This is an iconic African species of antelope, well renowned for its great stamina as its migration each year in East Africa enthrals us all. Its name’s origin is widespread and refers to appearance and behaviour. The name ‘gnu’ or sometimes referred to as ‘gnoo’ in older literature is also of Khoikhoi origin and refers to the grunt like the noise the bulls make when proclaiming territory or communicating with herd females. The name ‘wildebeest’ is of Afrikaans origin and loosely translates to ‘wild cattle’ and is reference to their appearance and habits. The name blue wildebeest has conflicting origins and is mostly accepted as a misinterpretation of the Afrikaans name blou wildebeest, where ‘blou’ translates to ‘blue’ but could also be a reference to the dark midnight blue sheen of the animal’s coat which is not as convincing. Either way, the name blue wildebeest and brindled gnu are accepted in the English dictionaries as official names for this tough African species. 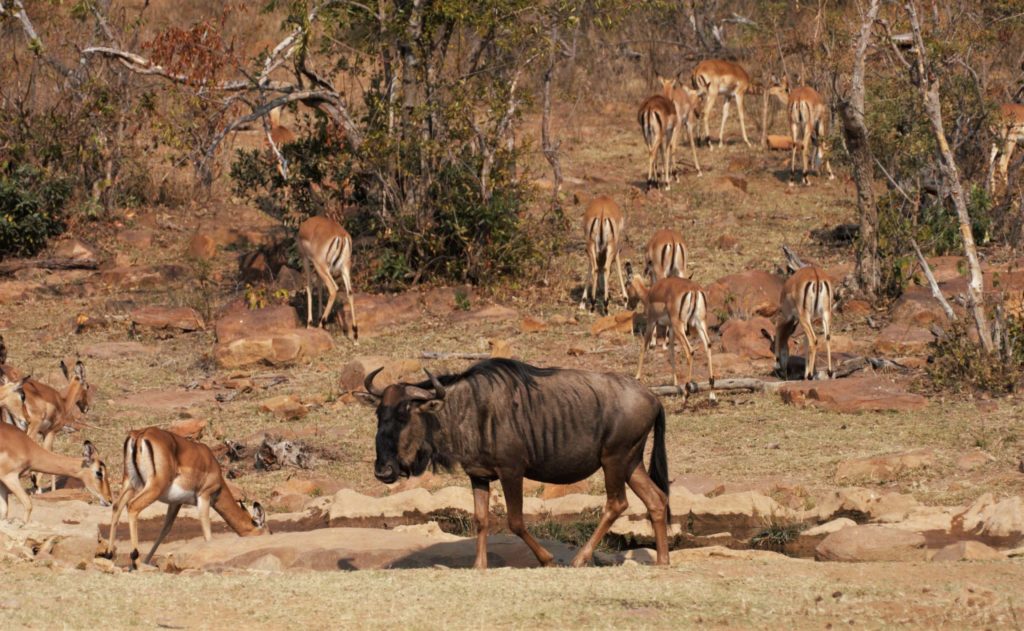 An easily identified and unmistakable African species. There is no other mammal on earth like it.   As the tallest mammal on earth, it stands 5 meters high, a meter taller than a mature African elephant bull and feeds on the best quality trees it can find in the African Savanna, well out of reach of other herbivores. The earliest origin of its name is from Arabic descent. The Arabic word Zarafa translated loosely to ‘swift walker’ is a reference to its long strides. It is also believed to have its latter origins from the Somali name for the animal, ‘geri’.  The name giraffe has been accepted since the 1600s in the English dictionary and remains as the only official English name for this species.

Once widespread throughout Africa into the Sahara and east in Sudan, this unique large cat is listed as vulnerable on the IUCN Red List of Threatened Species. With less than 7000 individuals believed to exist in the wild, it is fast becoming a species of the past. The name origin is from Hindustani descent from the word ‘cita’ or ‘Chita’. This intern is derived from the Sanskrit word ‘citra,’ which is loosely translated to variegated or painted and is a reference to the spot pattern of the animal. This must be one of the oldest name origins of any of the larger mammals found in southern Africa along with the lion. Both species of predators being widely distributed through Africa and into Asia, but who has since been restricted to small protected islands in what was there natural habitat for thousands of years.

This is often spotted at the Indaba deck at Makweti as it flits around hawking insects for its daily supplement. It is often seen around the spotlights that illuminate the waterhole at night where it feeds on insects that have perished searching for the light source. This non-descript bird is dull brown in colour and has little to distinguish it other than a faint orange colour on the wing and its habit of flicking its wings constantly whilst perched. 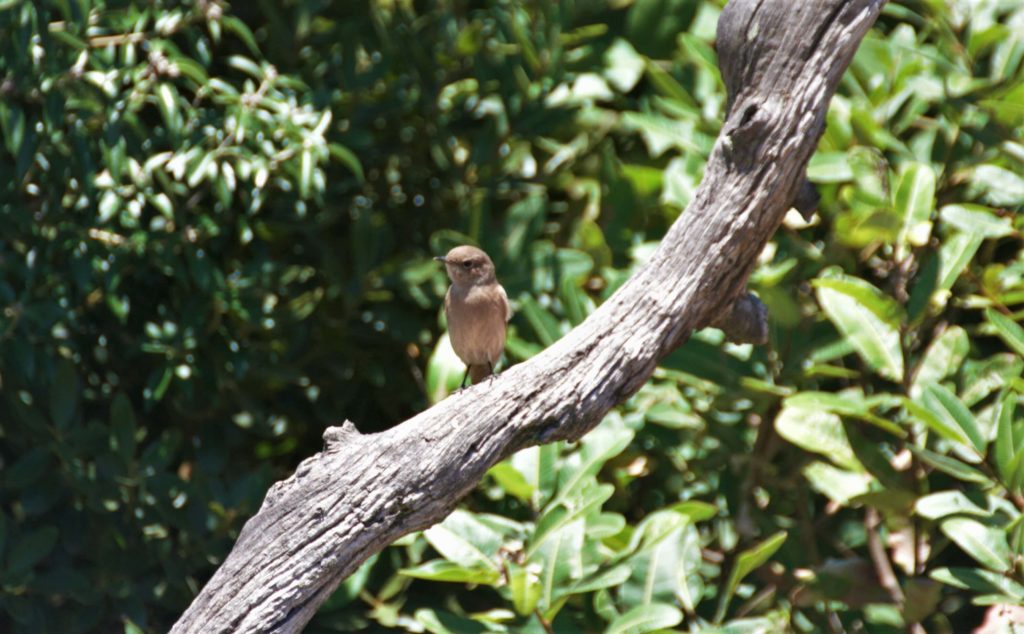 The origin of its name is a great tale and is well told by our friend, colleague and fellow guide at Makweti, Colin.

The use of ox wagons to discover the interior as with Burchell and Cornwallis Harris was to bring this little bird and the ‘Voortrekkers’ together. In Afrikaans, this little brown bird is called a gewone spekvreter or translated ‘common fat-eater’. The ox-wagons’ large heavy wooden wheels were lubricated with animal fat in order to reduce friction and make them easier for moving. In turning around and around on the journey, the fat would be worked out of the joints and this provided this little bird with a constant source of food. And so when the wagons would stop to rest or overnight, these little birds in searching for food would come across this tasty morsel oozing from the wagon wheels and over time learned where to find this source of food on seeing the wagons drifting into their domains. These little birds became quite habituated or ‘familiar’ with people and hence their names were derived – the familiar chat or in Afrikaans the gewone spekvreter.