February 19, 2022 By Leo van Zyl Wildlife At Makweti Comments Off

To honour World Pangolin Day, Makweti guide, Neil Davison, asked world authority and research ecologist, Jonathan Swart, to tell us a little more about the elusive pangolin, the world’s most trafficked animal. Their discussion sheds light on what the current pangolin population faces, and what the Welgevonden Game Reserve is doing to ensure that these precious mammals enjoy safety on the reserve.

1. You studied the Cape or Temminck’s Ground Pangolin towards your MSc in the Sabi Sands. What made you choose them as a study subject and in brief what was the aim and conclusion of the study? Please give a brief introduction of who you are and your role at Welgevonden Game Reserve.

While considering further postgraduate studies during my undergraduate student years with UNISA, I had no favourite animal that I wanted to study. All I knew is that I didn’t want to study any of the charismatic animals that had already been thoroughly studied, but rather I wanted to make a valuable contribution to research on an endangered or threatened species that was in need of research and was largely unknown. Pangolins weren’t on that list until I came across one while guiding in the Sabi Sand. As a guide, I was curious to find out more about pangolins, but there was very little in the literature, and on contacting the Mammal Research Institute of Pretoria University for more information, I discovered that they were looking for an MSc student to study pangolins. Since I was unable to meet the university requirements at the time, I assisted with finding and tagging pangolins with radio transmitters. In the meantime, I completed my BSc and Honours degrees so that I could qualify for the MSc Pangolin Project.

The main aim of the study was to determine the seasonal diet and foraging behaviour of pangolins, but being a pioneer study other aspects such as activity, scent marking, habitat utilisation, and home range were also studied. The most important finding of the study was that pangolins have a highly specialised diet where only a few ant species make up the majority of their diet and these species meet specific requirements in terms of their size and nesting behaviour for them to be available as pangolin prey. Findings on activity, habitat utilisation, and home range of pangolins complemented these results and also helped to determine the status of the pangolin population in a reserve such as the Sabi Sand.

Currently, I am the Research Ecologist for Welgevonden Game Reserve and I am responsible for all the research conducted on the Reserve and short- and long-term monitoring and analysis of vegetation, animals, rivers and all other ecological aspects of the Reserve. 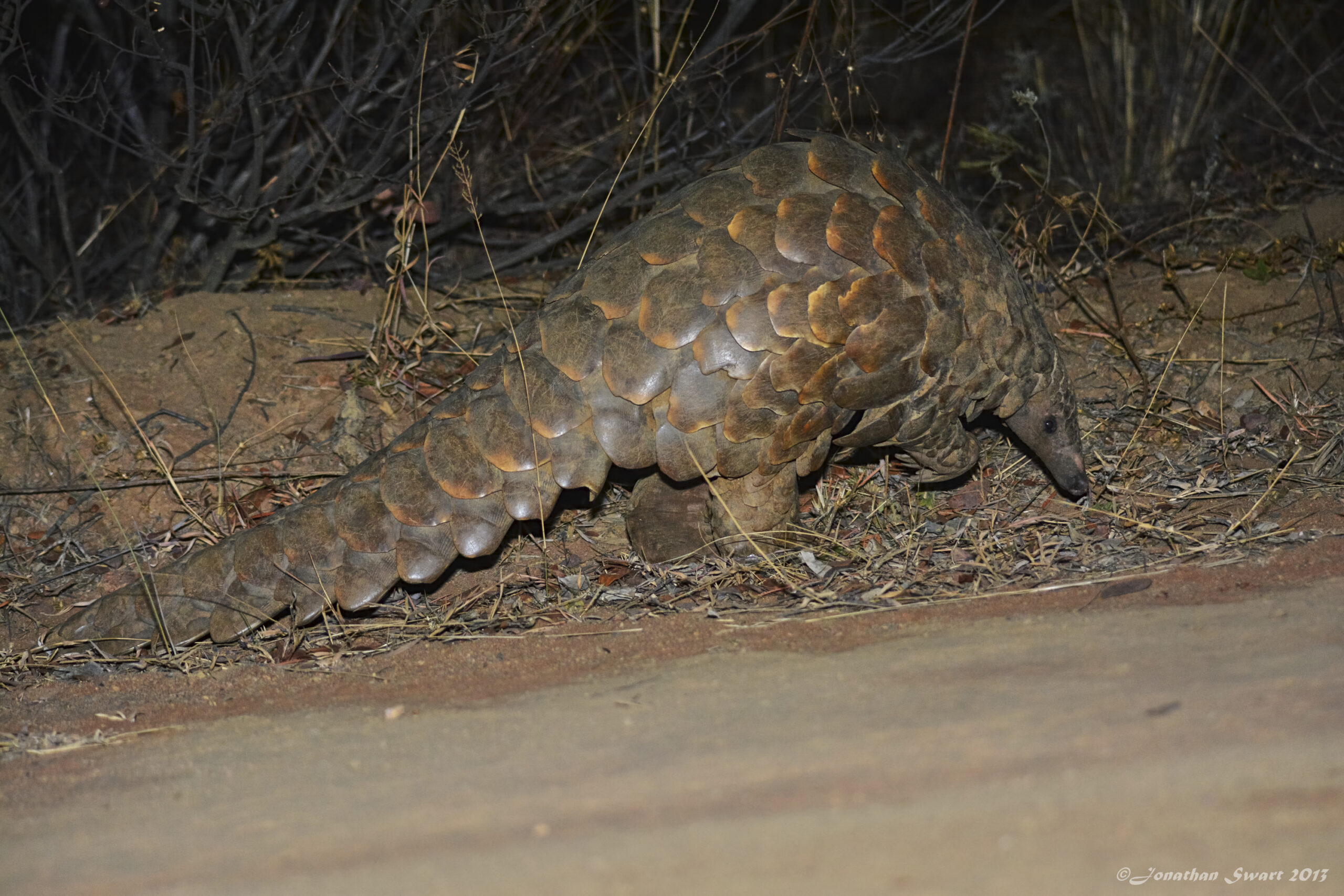 2. In my 24 years in the industry I have never seen a wild Pangolin, and here on Welgevonden Game Reserve, Pangolin have been rarely found. In your opinion is their rarity attributed to illegal trafficking and preferred habitat degradation or their natural habits, living in low densities, niche habitat availability or a combination?

Although pangolin numbers appear to be on the decline because of illegal trafficking and rural human settlement expansion outside natural areas, from my experience the rarity of Temminck’s Ground Pangolin is mainly attributed to their elusive behaviour. Pangolins usually forage in relatively dense undergrowth where they are very difficult to see and unlike most other mammals that may dash across a road or into the bush when alarmed, pangolins simply freeze and could easily be mistaken for a log by a passer-by.

To give an example; prior to my study, while I was guiding in the same area that I studied pangolins in the Sabi Sand, I only saw one pangolin over the period of three years. Even once I began the pangolin study it took me over four months of searching day and night before I found my first study animal to radio tag. Once I had a few though, they very quickly led me to other pangolins and within a couple of months I had 15 radio tagged. I identified over 30 individuals on my initial study area of 10,000 ha and after my study area was expanded to 20,000 ha I finally identified a total of 42 individuals. From their home range and habitat utilisation data I was able to estimate a density for pangolins of ca. 0.24/km2 (or one pangolin for every 4 km2) for the Sabi Sand, and an estimate of over 140 pangolins for the Reserve. To put this into perspective this is higher than the estimated lion population and far higher than the leopard population for the Sabi Sand.

This does not mean that the Temminck’s Ground Pangolin is not threatened; while they may be safe in game reserves, game farms and other intact natural areas they are most vulnerable where there is human rural settlement expansion where they are poached as a result of the high demand for pangolin parts for medicinal use in South Africa and the Far East. The elusiveness of this species may be its saving grace, in South Africa at least, and provide some buffer against poaching, particularly when pressure is exerted on this species as the Asian and other African species numbers are declining severely due to trafficking.

3. On Welgevonden Game Reserve, there is a road called Pangolin. It is rumoured that this area is ideal habitat for these animals. What makes this area their preferred habitat? How does this differ to other areas on the Reserve where Pangolin have been seen? How much do we really know about them and their habits in the wild?

Compared to the Sabi Sand for example, Welgevonden is generally not ideal pangolin habitat and I suspect that the road only got that name after someone saw a pangolin there several years ago, and not because many pangolins were seen there. In the 10 years that I have been on Welgevonden I don’t recall any sightings on Pangolin Road and most sightings have been around Eddie Young and Caracal Plains, where I have seen four different individuals over this period. The plateaus appear to be the most suitable habitat for pangolins on Welgevonden where more structured soils occur that provides more suitable nesting medium for their favoured ant prey. Much of Welgevonden is characterised by sandy soils which result in the collapse of the ant galleries of these species.

We have learnt quite a lot about pangolin habitat utilisation and foraging behaviour on this species, mainly through my study, which was in a more mesic area and a similar more recent study by Darren Peterson of pangolins in a more arid environment. There are currently several other studies that may fill some of the gaps in our knowledge. Breeding behaviour of pangolins is still an area that requires much more research as there is little know about this aspect of their behaviour. 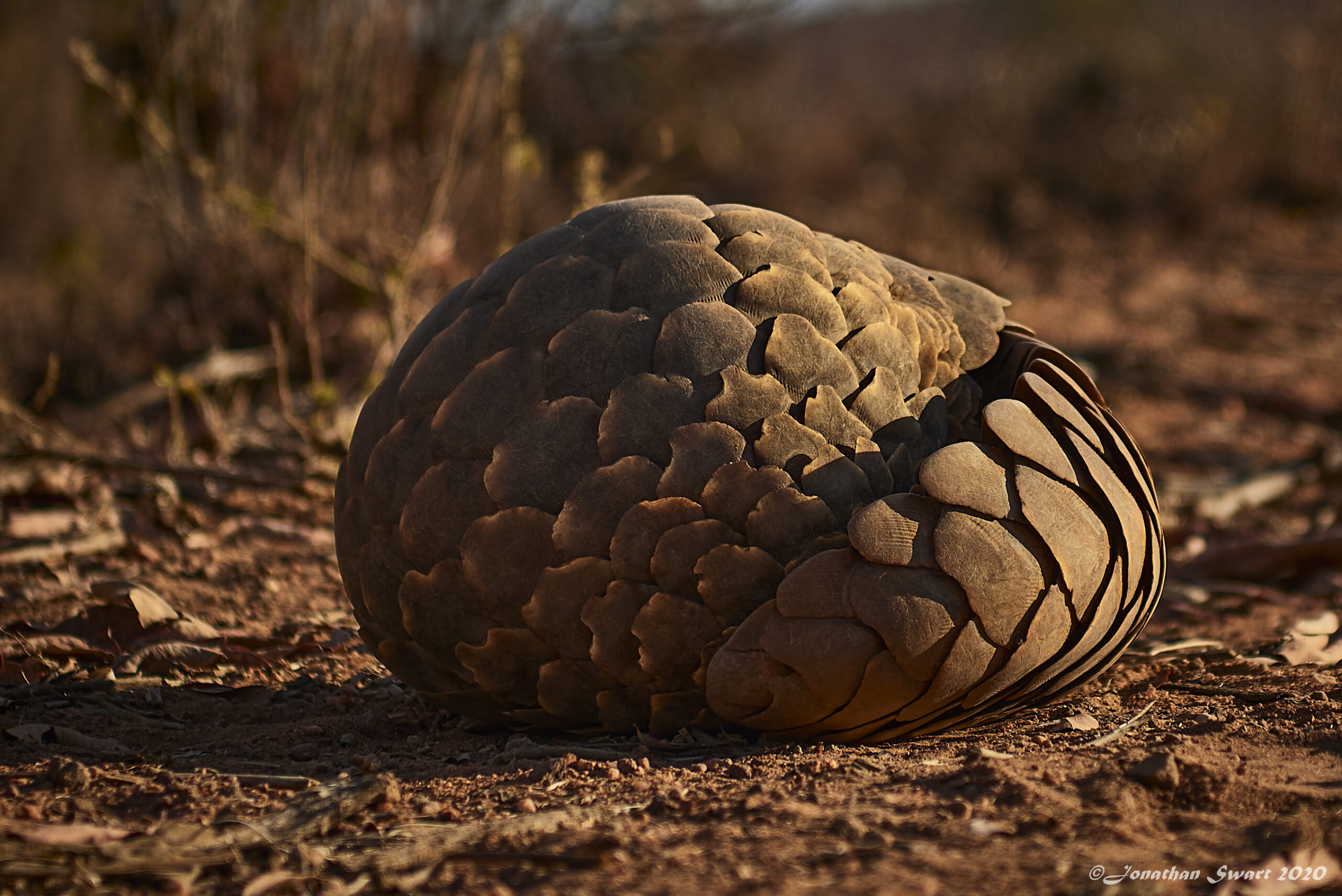 4. On many fenced game reserves in southern Africa, pangolin deaths attributed to electrocution by these fences are believed to be a significant contributor to annual mortality (2-13% depending on the fence configuration and the area). Any unnatural death is significant and the causes should be addressed. What does Welgevonden Game Reserve do to reduce this impact on pangolin mortality?

Electric fence configurations with a single trip wire are the most lethal to pangolins, particularly when combined with small Bonnox mesh. Based on results of tests I conducted in the Sabi Sand, pangolins will negotiate a wire strand by either climbing over or squeezing under the strand. I ran several tests on different pangolins with different strand heights and found that if the strand was 15 cm or higher, they would squeeze underneath. In the case of a live strand, passing underneath is generally safe as their scales insulate them from the current, but climbing over the live wire is lethal as their belly comes in contact with the wire and when shocked their natural reaction is to curl up around the strand and thereby repeatedly being shocked until they are killed. However, if the fence has a bonnox mesh and the pangolin manages to pass under the electric strand they are likely to get tangled in the mesh because of their backward facing scales and in struggling to break free often also entangle in the electric strand and end up being electrocuted.

Welgevonden’s electrified perimeter fence can be regarded as pangolin friendly since we have not had any reports of incidences of pangolin electrocutions. WGR has a double strand trip wire with the lower strand being the earth strand and this is the strand that the pangolin is most likely to contact, so even if the pangolin climbs over the earth wire it is not likely to be electrocuted. The lower earth strand is also usually 15 cm above the ground. In addition, there is no Bonnox mesh on the perimeter fence, thus allowing the pangolin to move freely through the fence once passed the electric strands. Our fence patrollers also inspect the perimeter fence very regularly. The Welgevonden perimeter fence configuration sets a good example for other Reserves and game farms to follow to provide safe passage for pangolins.

5. As with many species that are threatened or endangered, I often get asked, what does it matter if these animals disappear? A selfish outlook of many that states ‘they don’t have any bearing on my existence’. Controversially, what ecological importance do these animals serve and how would this change the habitats they occupy, should they be absent?

“Does it matter if pangolins disappear?” is probably more of a philosophical question than a question of ecological significance. To allow the disappearance of an animal that has evolved into such a specialised niche and dates back at least 45 million years would surely be sacrilegious.

As with most life forms on earth, from an ecological context pangolins form part of a food web, and for the most part are on the top of their web, except if they happen to be preyed on by a predator. There are no predators that are reliant on pangolins as a food source, thus removing pangolins from the web is not likely to be detrimental to apex predators. The top-down ecological impact after the disappearance of pangolins is likely to be far greater as pangolins consume a substantial number of ants during their foraging bouts. I estimated from several stomach samples that I collected from dead pangolins (mostly electrocuted animals) that on average each pangolin consumes approximately 200 grams of ants in a night, or ca. 80,000 ants. Thus, the biomass of ants consumed by a pangolin in one year is ca. 73 kg or 29.2 million ants in an area of approximately 4 km2 of pangolin habitat (based on Sabi Sand pangolin densities). Ant biomass based on aboveground activity surveyed during my research was estimated at ca. 325 kg in a 4 km2 area but is likely to be considerably higher as the underground biomass of ants was not measured. Removing pangolins is not likely to result in ant explosions as climate conditions are probably more important in regulating ant populations followed by ant predators, of which there are many. However, since ants are the major predator of termites, one of the knock-on effects of the extinction of pangolins from woodland savannahs could result in higher ant predation on termite populations, and since termites play an important role in nutrient cycling in these systems, this could be detrimental to the health of savannah systems. 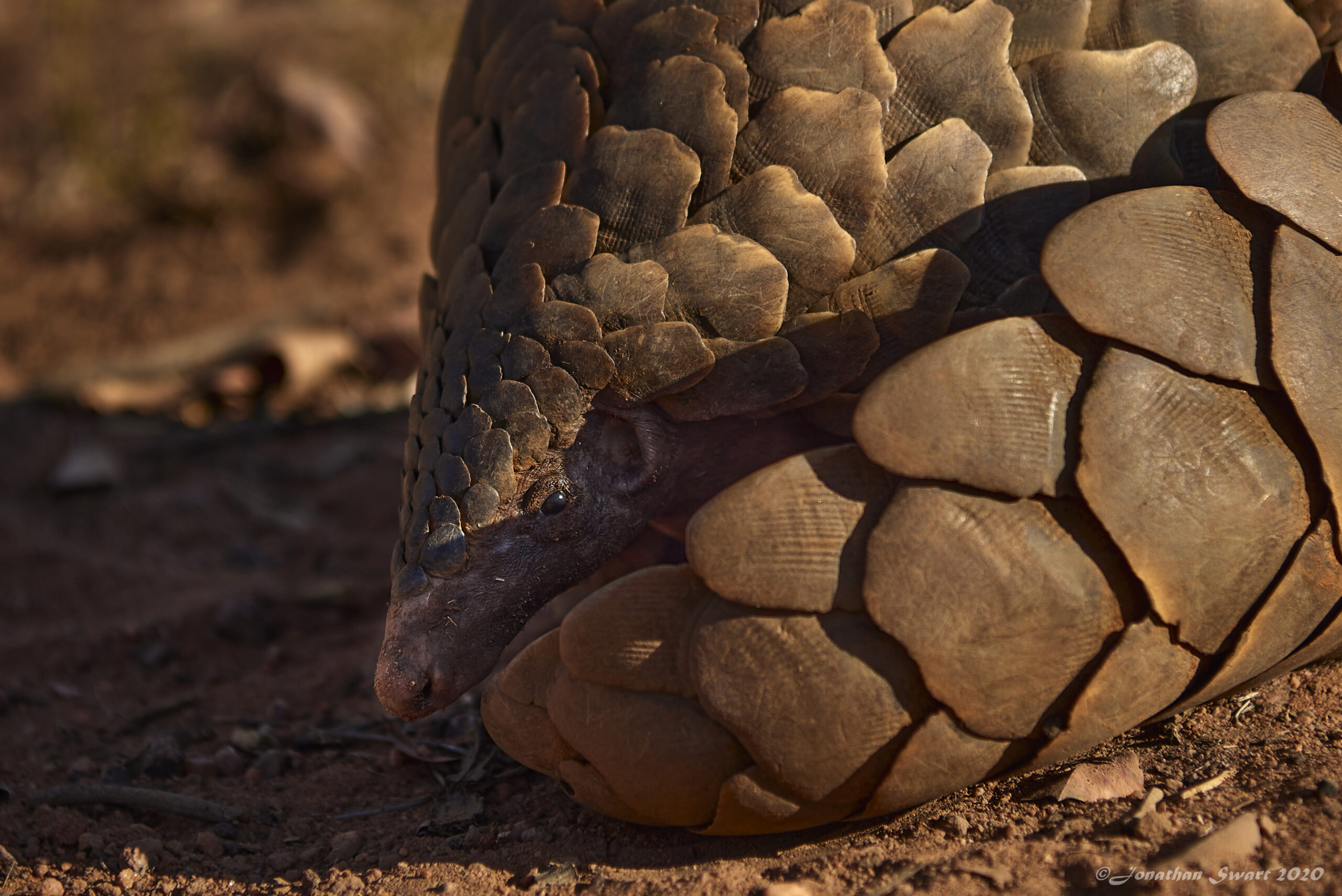